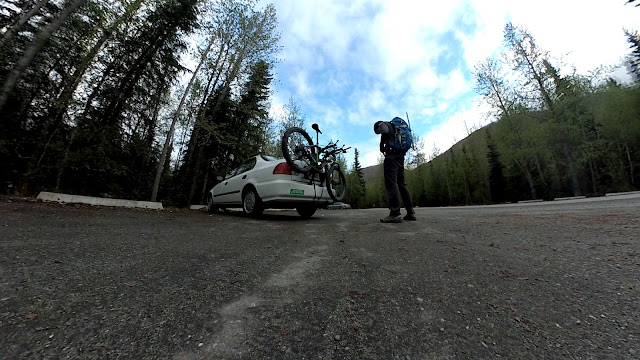 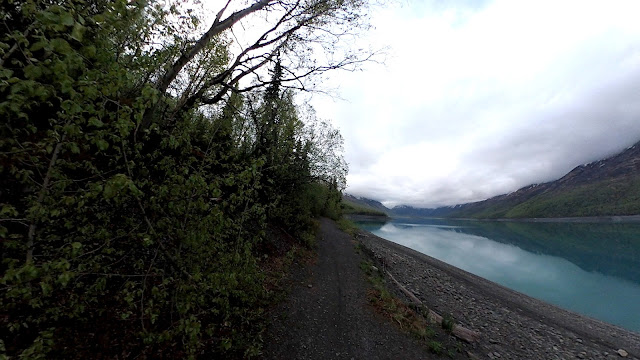 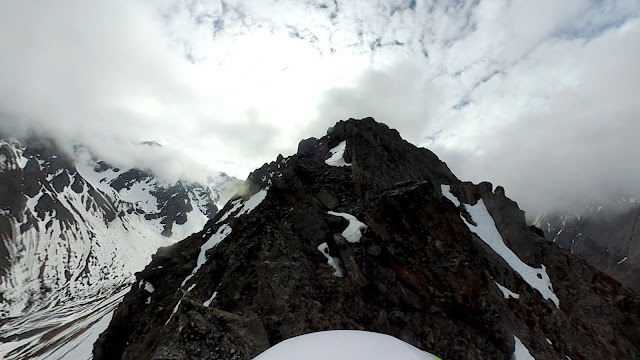 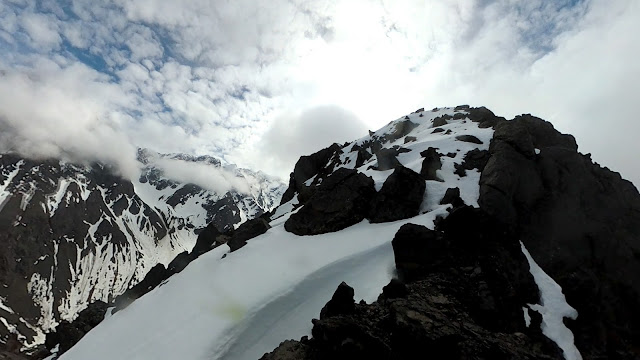 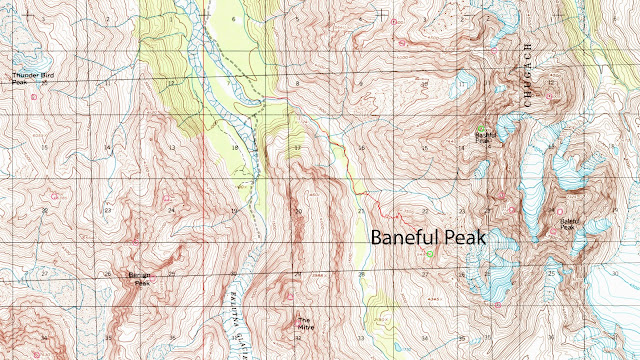 Goat Rock is a pointy 5200' tower of Chugach crud located near Eklutna Lake, Alaska.  There is no specific trail approaching it, and the two main summit routes require either exposed scrambling or outright rock climbing.  It's a fun climb, but unsurprisingly, it doesn't see a lot of traffic.

I parked at the S turn just before the ice cream shop on Eklutna Lake Road, and was soon bushwacking upward through a mixed forest of deciduous and evergreen.  Eventually the forest thinned out, and I emerged above treeline onto a very steep grassy slope.  After a few more minutes, I reached a gentle ridgeline with a view of the task ahead - Goat Rock.

As I got closer, I began following a sheep trail through the scree.  This led me below a promising gully to the West col.  I started upward, picking my way through talus and bits of remaining ice and snow.  The travel stayed mellow, if a tad wet and mossy, until finally bringing me to a sharp ridgeline and dropoff.

I had gone a bit further West than I had intended, and missed the col!  No matter -  backtracking was easy, and I soon traversed into the correct gully and was on the col.

The opposing side of the col dropped off very steeply, and I could tell that the going was about to get steep no matter which way I went.  The West ridge itself rose abruptly to the right, and I spotted a trickle of water coming down by an old climbing anchor.  As I came up to this, I could tell I would be crossing the "no bueno" category of downclimbing if I continued up.  I tried going around to the left and to the right, but came up empty.  It was all steep and saturated, or a mixture of the two.

Discouraged, I backed off, and then my eye caught a snowy ramp that was about 50 feet below the col.  I started tentatively up this, and was delighted to find that it stayed much more mellow than the terrain on my left.  Gradually though, it did narrow, and forced me into tighter and more exposed terrain.  At last, the ramp came down to cliffs on the right, and a body width crack ahead.
The crack seemed that it still might not be a fun downclimb, so I tested it.  Not very good.  It was then it occurred to me that my large winter backpack, with an ice axe and all sorts of gear, might be hindering my  maneuverability in the narrow space.  So, realizing that leaving my pack for a few minutes was probably fine on this deserted peak, I decided to take it off and try again.

This was the magic bullet I needed!  Without the cumbersome weight on my back, I fairly flew up the crevice and was soon on much easier terrain.  I picked my way through the remaining rocky travel, which never again rose to the same steepness as the crevice I had passed.

The summit came up quickly, and I was happy to see rays of sun poking through the cloud cover.  Opening the summit register proved a hilarious struggle.  Whoever last closed it did a good job of it!  Funny enough, I flipped open the paper and the first name I saw was Bill Finley!  Hmmm...  Bill's trip reports are the framework I refer to whenever I need a helping hand on a peak (and I'll admit, I did read some about Goat Rock too!!)  I signed my name, albeit accidentally claiming the date one day ahead, and headed down.

Needless to say, downclimbing the 4th class segment to my backpack was a lot easier without the pack being ON!  It was also warmer at this point, so I took my gloves off for even greater downclimbing prowess.  Shouldering the pack, I made it back down to the col without incident.

As I backtracked the sheep trail, I thought it would be fun to also do a quick jog over to POW/MIA.  Since leaving my pack had worked so well just a few minutes before, I left it again to make jogging easier.

I snapped a few pictures from POW, then headed back to the pack, and from there to the car.  The grass field I had come up was still INSANELY STEEP!!!  (Hmmm...  Exactly the same as it was on the way up, haha.)

Goat Rock is an awesome early season way to get some good 'ol fashioned Chugach crud exposure with a minimal approach.  There are a lot of climbing options as well - mild, medium, spicy, or very spicy indeed on the north side.  I was content with the mild!!

Watch my videos (listed below) or pay very close attention to Bill Finley's excellent trip report.  If you want to scramble this peak AND downclimb it, it's important to hit everything right on the West Ridge.  Downclimbing the ridge proper would be quite bad if the rock is wet.  The crack/ramp go-around is definitely easier but is still exposed and narrow.  As Bill mentions, it's a great way to get summer started with a nice bit of scramble practice.  Be careful, and have fun on this pointy, seldom visited Chugach peak.  Stay tuned for lots more peaks this summer.

Posted by Nate Bannish at 6:53 AM No comments: