Ice climbing has always been a mysterious, uncharted world of intimidating pointy things, strange jargon, frozen fingers, and prohibitive equipment costs.  That's why, when a co-worker gifted me some used ice gear, I took it as a sign that the first hurdle had been passed, and it was up to me to do the rest.  Oh boy!  (By the way, thank you again, Tom.)

Having heard about my recent acquisition of some weapons of ice destruction, Brendan, friend and fellow Chugach crud tosser, graciously volunteered to bring me out for my first ice climb ever - Blitz!

Blitz is a two pitch climb near Pioneer Peak.  The first pitch is easy low angle ice, and the second, shorter pitch, is steeper and more interesting.  Brendan explained to me the general theory of lead climbing as we walked to the start - the leader would go up first, placing ice screws as he went, build an anchor, bring the follower up, and then the process would repeat.  It seemed I had a lot to learn.  We covered lead belay technique, good feet placement, how to swing tools, and how to communicate.

With that, Brendan was off, and I watched him pick his way through the initial few feet of ice, placing screws for my observational benefit.  Soon enough he was at the top, and it was my turn.

I tentatively began, trying to remember my good feet and tool placement.  Taking out ice screws was hard with a big 'ol gloved hand!  I quickly realized how much focus is needed while climbing ice.  There isn't room to think about anything else.

It was all smiles as I reached the top of the first pitch.  That's when I knew what I'd been missing all these years.  Love at first sight.


Me on my first day of ice climbing!

Despite my enthusiasm, the climb was actually in poor condition.  It had been ridiculously warm for the past week, and the upper pitch sounded disturbingly hollow as Brendan went up.  We decided to do a few top rope laps on this upper part, each time topping out in mud rather than ice, until finally our gloves were soaked and so was the rope.  Maybe it was time to call it a day.  We practiced a v-thread, talked about anchors, then rapped down and walked out.

Thanks for showing me the ropes, Brendan.

For whatever reason, it took me longer than expected to get around to climbing my second bit of ice.  Perhaps I was too focused on the 2019 Frosty Bottom, but no matter the cause, when Chugach crusher Cody K. invited me along for an after work ascent of Ripple, I couldn't refuse.

Ripple, a 65 meter WI3 waterfall, is a southcentral "Rite of Passage" and has a much more interesting approach than Blitz.  After parking Cody's truck, we were soon crawling along narrow ice shelves against the dark walls of Eklutna canyon. What an interesting way to spend an evening!

After a few miles of groveling and wall hugging, travel became easier, we turned a corner, and there it was -

It looked tall, really tall, and having only a headlamp to illuminate the frozen giant didn't makes things look any friendlier.  I hoped I was up to the task as Cody handed me a radio, ice screws dangling from his harness.  I backed off, stepping to the side to avoid the inevitable barrage of ice chunks, and let him know he was on belay.  With a couple strong swings, Cody started up the initial bump of ice, echoes of metal on ice reverberating in the chilly canyon ambience.

Our world was reduced to the shine of headlamps and the sound of progress, bringing a focus that distorted time and made me unaware of the January temperatures.  Eventually, Cody's light grew smaller, and I heard a distant, exalted whoop as he crested the last section. He was at the top!  I waited for my turn.

As Cody put me on belay, I shook out my hands and feet that were now feeling the cold.  Taking a deep breath, I launched upward into the darkness.

Unlike Blitz, Ripple starts off steeply, and as I came to the first ice screw I realized I was closer to the screw than I probably should be.  It was a struggle to remove it and put it on my harness.  I ended up using a lot of poor technique in doing so.  Acutely aware of how long I was taking, I tried to ignore the insistent upward tug of the taught rope.  In my mind, I was apologizing to Cody for the noob-ness.

I committed myself to doing a better job on the following parts.  And I did!  I stacked my tool placements, formed my triangles, and plucked screws with serene prowess.  Before long, I reached what might be the "crux" of Ripple.

Much of the earlier climbing is far from steep, with flowing bulges of ice that offer short, steeper boulders, until suddenly you come to a long, nearly vertical section.  I took a few deep breaths as I felt gravity increase its tug, reminding me that I was stuck to a fragile medium by only a few inches of steel, and continued on - the reassuring tension of the rope coaxing me upward.

With a jangle of appropriated ice screws, I hauled myself over the ledge and into Cody's lamp light.  We shared a reverent moment, staring into the dark clear night, watching our breath in the crisp air.  We did it!

Hilariously brushy rappel on a variant of the nearby Spruce Pitch 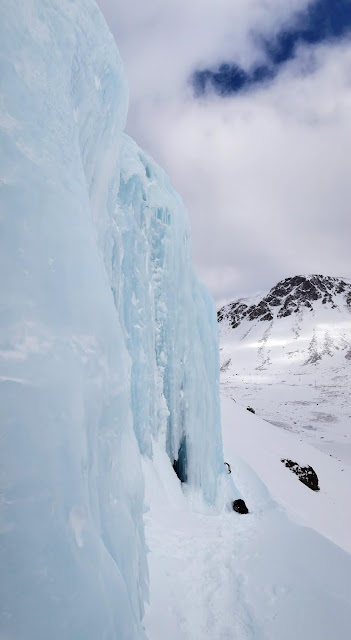 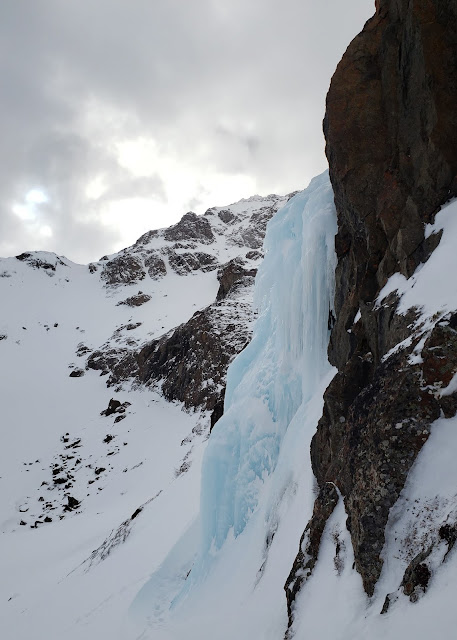 Video of the Quarter Climb & another mellow bit of ice nearby

Posted by Nate Bannish at 10:02 AM No comments: